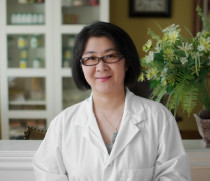 Mrs. Xu had been practicing Chinese Medicine and Acupuncture and Conventional Western Medicine in the Department of Internal Medicine, Gynaecology,﻿ Digestive tract diseases, Emergency Room in the First Affiliated Hospital of Tianjin University of Traditional Chinese Medicine and Tianjin Infectious Disease Hospital for over 30 years.

She conducted medical researches on Chinese Medicine, Acupuncture and Western Medicine on cardiovascular disease, gynaecological diseases, metabolic diseases and cancer and had spoken at national and international professional conferences, as well as published numerous research papers in various peer-reviewed journals.

Mrs. Xu devotes her passion to her patients by offering effective Chinese Medical care and teaching the valuable tools of self-care through patient education. She believes enthusiasm and devotion is beyond the skills.

Mrs. Xu is highly respected in her peers and is reputed as one of the top Chinese Medicine practian in Great Toronto Area.

She can speak English, Mandarin, and Japanese.﻿

Call to discuss your options:

Great things happen when you put your heart into it.

Questions about your first appointment or if your insurance will cover the cost? Find more information below.